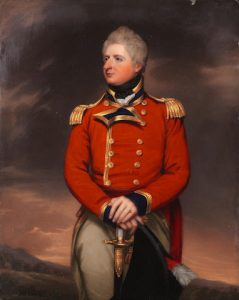 Henry Bone portrait recovered
An enamel work by Henry Bone has been recovered by the ALR and sold at a UK auction house towards the end of last year. The portrait of Lieutenant-Colonel the Hon. Francis Wheler Hood is after an original by Thomas Stewardson, now at Loders Hall in Dorset. A pencil drawing by Bone of the same subject and dimensions is also at the National Portrait Gallery.
Lt.-Col. Hood, who is portrayed in this painting, belonged to the 3rd Foot Guards and died in the Napoleonic Wars at the Affair of Aire on 2nd March 1814.
The Bone painting was stolen from a private residence in Hampshire in 2008, and has now been recovered and sold on behalf of the insurers.

The ALR – just ‘old, stolen art’?
A common misconception about the ALR is that we are only relevant to ‘old’ and ‘traditional’ art that has been stolen.
In fact, works that might be sold on the international art market, and which are subject to an ownership claim or dispute, can be recorded on our database. This ensures that they can be identified if an attempt is made to sell them prior to the resolution of the claim.
Within that category, a few years ago we registered a community mural in Gdansk, Poland by the artist STIK after it was cut up and offered for sale at a London. We are delighted to say that the work is now being returned to Gdansk.

ALR incorporated into La Biennale
We are proud to announce that the ALR will be working as part of the vetting at La Biennale Paris from September 2019.
The ALR will work alongside the fair’s external Commission d’Admission des Oeuvres to check exhibited objects against our database before the opening of the fair.
We provide such services now at 16 international art fairs.
La Biennale Paris will be open to the public 13th to 17th September – find out more on what to expect at the next edition. For a full list of the fairs at which we work, see our website.

Comment: Early Due Diligence Pays Out
In almost 30 years of providing due diligence services to the art market, the ALR has seen many examples of the positives effects of early and thorough due diligence.
Prime examples in 2018 were two paintings consigned to the German auction house and longstanding ALR subscriber Van Ham as part of the Waffenschmidt collection. Van Ham conducted extensive research into the provenance of all works in this consignment, and as part of the research asked the ALR to examine them. At an early stage, a Garden Pub scene by Max Liebermann, and a flower still life by Lovis Corinth were identified as having belonged to two Jewish families in the 1930s/40s when they were persecuted by the Nazis. With Van Ham assuming a mediating role between the consignor and the representatives of both families, amicable solutions could be found because all parties involved were willing to compromise. Van Ham was thus able to include both paintings in the Waffenschmidt sale with a definite and cleared World War II provenance, and made the ownership history of both works public. Competitive bidding ensured that Liebermann’s pub scene more than doubled its pre-sale estimate at €678,500, and Corinth’s flowers sold for more than three times its estimate (€490,500).
As a good provenance does increase the value of an artworks, we can only encourage all art market participants to clarify provenances before any transaction.

Arctic Explorer Pen Hadow’s watch recovered
In winter 2018, the ALR’s The Watch Register collaborated with UK law enforcement and the watch portal
Chrono24 in the recovery of a special Favre-Leuba watch stolen from Arctic explorer Pen Hadow. The Raider Harpoon watch was gifted to Mr. Hadow by the manufacturer as part of their sponsorship of his Arctic Mission voyage.
In April 2018, the watch was stolen by an opportunistic thief in Dorset, UK. Six months later, the watch appeared for sale on Chrono24 where it was spotted by Favre- Leuba. The watch was immediately registered with The Watch Register to minimise the risk of it being sold to an unsuspecting buyer. A careful recovery operation was coordinated
by DC Thomas Grimshaw from the Metropolitan Police Flying Squad, working with Dorset and Avon & Somerset police forces, to rapidly retrieve the watch from the seller before it vanished from the site. Mr. Hadow commended the efficiency and expertise of the UK police and their collaboration with the ALR and the Chrono24 Fraud Department ‘to deliver the best possible outcome’ in these exceptional circumstances.